The moving shores of things

I would like to dedicate this post to the victims of last week's attacks in Paris, who were blindly sentenced to death without notice because they were guilty of joie de vivre, or maybe simply of humanity. I started writing those lines before the attacks, and they could seem at first sight to have nothing to do with Daesh madness. But if you are patient enough to read down to the end, I hope you will find relevant food for thought in the context of those events.

Whether things are ontological primitive or abstracted from the states of affairs, as suggested in our previous post, to deny them any kind of existence would fly in the face of common sense and experience. Mountaineers know that there are mountains, rocks and streams, sailors know that there are seas, waves and storms. But ask them what mountain or sea is, and you're likely to get all but a definition. They will certainly tell you awesome stories of climbing and sailing, maybe show you images, and the most sensible of them will just propose to go with them for climbing or sailing to figure by yourself, experiment the thing, be part of it.
Why is it so? Because being is not being neatly defined. Our logicians and ontologists would like to make us believe that the world can be split neatly between this and that, day and night, land and sea, human and non-human etc, categories which could be logically defined. There are many reasons why they are wrong, the most often quoted being the arbitrary choice of such limits, since the world can be split into things in many ways. A good introduction to the current discussion on this viewpoint called relativism can be found in the Stanford Encyclopedia of Philosophy.
But relativism is not the best and primary stance I would choose to argue why trying to give a logical definition of mountain or sea or whatever else is bound to fail forever. The main point is that such things, as well as most things you can think of, have fringes, shores, edges, interfaces ... (the name depending on the kind of things you consider) through which they are less separated from than intertwined with each other. If you look at a shore from far enough, it can look like a neat line. But if you look closely, while walking on a beach or at the edge of a forest, you will discover a very complex world which belongs to neither or both worlds that meet here. On the shore, the sea enters the land and the land feeds the sea in the perpetual circulation of waves and tides. The shore is where land and sea communicate and exchange. At the forest edge, animals perpetually come in and out of the trees' shelter to feed in the grass and fields. And what is the forest itself, if not a shore between earth and sky, with thousands of trees as so many links and knots between the depth of ground and the air. Great examples of such intertwining interfaces are mangroves, known to be extraordinary rich ecosystems. 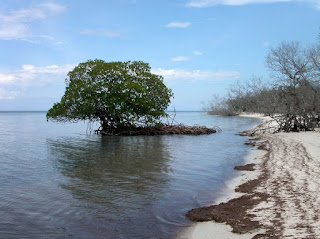 The concepts we abstract from the world and toss to each other's face in our endless arguments and wars are of the same nature. Between life and death, human and non-human, the limits should look indeed like the above, moving and intertwined. And thinking otherwise that those moving shores are or should be reduced to neat lines is the first step towards totalitarism, exclusion, and death.

The words and acts of Daesh have gone of course very far down such an alley, but to fight them back we should be careful not to use similar simplistic rhetoric, ignoring the complexity of fringes and shores, replacing them with edges as straight and cutting as their knife's blade. One of those, the most simplistic one still unfortunately thought aloud by too many people, leads to broadly confuse Daesh with Islam, when 99.9% of Muslims condemn the terrorism, and more than 80% of Daesh victims are Muslims. But the defensive stance of many moderate Muslims claiming outloud that Daesh is not Islam, and his members are not the Muslims they claim to be, is equally simplistic and counterproductive. Daesh is indeed a shore of Islam, although a very remote and dangerous one, and moderate Muslims would certainly benefit to acknowledge outloud that such a shore exists, where Islam meets and intertwine with intolerance, obscurantism, organized criminality, thirst for glory and power, or sheer madness. As any shore, you can get there from both sides. From inside Islam through fundamentalism, and from outside through social exclusion and criminality.
Beyond or inside Islam, we see many people saying or writing that Daesh killers have put themselves by their words and acts deliberately beyond humanity, and therefore could and should be simply shot down as dangerous furious animals. Calling them "monsters" or "barbarians", whatever fits for saying "they are not like us and must be eliminated" is as simplistic and counterproductive as the above claim "they are not Muslims". Daesh killers certainly dwell on some strange and frightening fringe of humanity, so far off that they are even able to shake the notions we have of what makes humanity. But whether humans or barely so, barbarians, monsters, or simply mad criminals, in any case they have come to this deadly shores from inside humanity, and we need to understand how they got there to prevent more young people to follow the same paths.
Posted by Bernard Vatant à 01:34