It is so because it is so

I've been through a few mountain paths and Chinese ancient texts this summer, both demanding fitness and attention of body and mind, and quite interesting to put together. 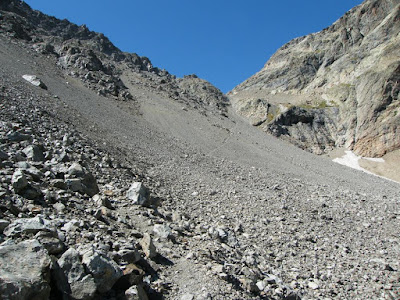 The above image I captured yesterday, the caption is extracted from one of the most challenging pages of Zhuangzi, quite close in spirit to another taoist piece we've been through in a previous post. We have here also a symmetrical sentence conveying the idea of a parallel ontogenesis for paths and things. The following is my synthesis of various translations.

The second part is indeed close to Laozi (having a name is the mother of all things). The implicit assumption, in a taoist context, is that there are adequate ways for both walking and naming. Even if, like in the above image, the path is barely visible and seems to vanish at some point. Such unsteady tracks quickly disappear if not regularly trodden, but they are not as contingent as they could seem. Even without any visible track, any (good) walker would make its way through the scree towards the background pass following a more or less similar path. From a taoist viewpoint, the (good) walker's path would fit the lines of the landscape, his path in harmony with the general way of things, both being called 道 (dào). The (wise) man will do the same in naming things, following the natural lines of his current cultural landscape. Bearing in mind that this landscape is bound to change, hence neither path or thing have any absolute and definitive existence.
And Zhuangzi in the following sentence pounds the point that there is no need for further explanation or dispute about it, through the insisting use of the word 然, meaning here "so" or "like this". The (adequate) path is so because it is so, the (adequate) thing is so because it is so.

The translation at Chinese Text Project is adding an extra layer of interpretation.


A path is formed by (constant) treading on the ground.
A thing is called by its name through the (constant) application of the name to it.


This "constant" is not explicit in the original text, but it makes sense in the cultural context of Zhuangzi writing. For the track to become a path, it has to be trodden again an again by many people, and the name gets its meaning by usage. Paths and things are polished cultural artefacts.
Posted by Bernard Vatant à 23:31